vCenter Server is a critica1application for managing your virtual infrastructure. Tts implementation should be carefully designed and executed to ensure availability and data protection. When discussing the deployment of vCenter Server, some of the most common questions include the following:

• How much hardware do I need to power vCenter Server?

• Which database server should I use with vCenter Server?

• How do I prepare vCenter Server for disaster recovery?

• Should I run vCenter Server in a virtual machine?

A lot of the answers to these questions are dependent upon each other. Still, I have to start somewhere, so I'll start with the first topic: figuring out how much hardware you need for vCenter Server. 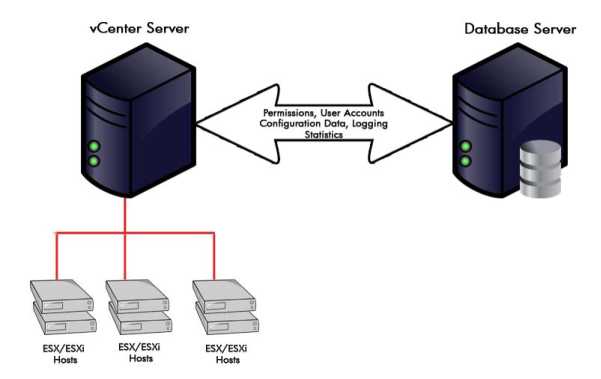 Most modern physical servers ship by default with quad-core CPUs. vCenter Server is able to leverage some of the additional processing power but won't fully utilize all four CPU cores. It's for this reason that our discussion on sizing vCenter Server focuses more on RAM than on CPU capacity.

Without considering the separate database server, VMware suggests a system configured with two CPU cores and 3 GB of RAM to support up to 100 ESX/ESXi hosts and 2,000 virtual machines.

An environment of that size is much larger than a typical environment might be, so it's feasible to simply scale the specifications back to meet your needs. For example, a server with two CPU cores and 2GB of RAM should suffice for up to 50 ESX/ESXi hosts and 1,000 virtual machines. Though it helps to have a good starting point for the deployment of vCenter Server, you can always alter the specifications to achieve adequate performance levels.

IBM DB2 v9.5 is experimentally supported for use with vCenter Server, but not for any other components of VMware vSphere such as vCenter Update Manager or other plug-ins that require database support.

So, how does an organization go about choosing which separate database server to use? The selection of which database server to use with vCenter Server is typically a reflection of what an organization already uses or is already licensed to use. Organizations that already have Oracle may decide to continue to use Oracle for vCenter Server; organizations that are predominantly based on Microsoft SQL Server will likely choose to use SQL Server to support vCenter Server. You should choose the database engine with which you are most familiar and that will support both the current and projected size of the virtual infrastructure.

With regard to the hardware requirements for the database server, the underlying database server will largely determine those requirements. VMware provides some general guidelines around Microsoft SQL Server in the white paper "VirtualCenter Database Performance for Microsoft SQL Server 2005," available on VMware's website at www.vmware.com/files/pdf/vc database performance.pdf. Although written with VirtualCenter 2.5 in mind, this information applies to vCenter Server 4.0 as well. In a typical configuration with standard logging levels, an SQL Server instance with two CPU cores and 4GB of RAM allocated to the database application should support all but the very largest or most demanding environments.

Planning for a vCenter Server deployment is more than just accounting for CPU and memory resources. You must also create a plan for business continuity and disaster recovery. Remember, features such as VMware VMotion, VMware Storage VMotion, and VMware DRS - but not VMware HA - stop functioning when vCenter Sever is unavailable. While vCenter Server is down, you won't be able to clone virtual machines or deploy new virtual machines from templates. You also lose centralized authentication and role-based administration of the ESX/ESXi hosts. Clearly, there are reasons why you might want vCenter Server to be highly available.

Keep in mind, too, that the heart of the vCenter Server content is stored in a back-end database on Oracle or SQL Server. Any good disaster recovery or business continuity plan must also include instructions on how to handle data loss or corruption in the backend database, and the separate database server should be designed and deployed in a resilient and highly available fashion. This is especially true in larger environments.

A variation on that approach is to keep the standby vCenter Server system as a virtual machine. You can use physical-to-virtual (P2V) conversion tools to regularly "back up" the physical vCenter Server instance to a standby VM. This method reduces the amount of physical hardware required and leverages the P2V process as a way of keeping the two vCenter Servers synchronized.

As a last resort for recovering vCenter Server, it's possible to just reinstall the software, point to the existing database, and connect the host systems. The installation of vCenter Server is not a time-consuming process. Ultimately, the most important part of the vCenter Server recovery plan is to ensure that the database server is redundant and protected.

For high availability of the database server supporting vCenter Server, you can configure the back-end database on an SQL Server cluster. Figure 3.4 illustrates using an SQL

Server cluster for the back-end database. This figure also shows a standby vCenter Server system. Methods used to provide high availability for the database server are in addition to whatever steps you might take to protect vCenter Server itself. Other options might include using SQL log shipping to create a database replica on a separate system. If using clustering or log shipping database replication is not available or is not within fiscal reach, you should strengthen your database backup strategy to support easy recovery in the event of data loss or corruption. Using the native SQL Server tools, you can create a backup strategy that combines full, differential, and transaction log backups. This strategy allows you to restore data up to the minute when loss or corruption occurred.

Installing and running vCenter Server in a Virtual Machine

VMotion gives you the portability required to move the server from host to host without experiencing server downtime. VMware HA restarts the vCenter Server automatically if the physical host on which it is running fails. But what happens when a snapshot is corrupted or the virtual machine is damaged to the point it will not run? With vCenter Server as your virtual machine, you can make regular copies of the virtual disk file and keep a "clone" of the server ready to go in the event of server failure. The clone will have the same system configuration used the last time the virtual disks were copied. Given that the bulk of the data processing by vCenter Server ends up in a back-end database running on a different server, this should not be very different.

If vCenter Server is a virtual machine, its virtual disk file can be copied regularly and used as the hard drive for a new virtual machine, effectively providing a point-in-time restore in the event of complete server failure or loss.