VMware Fault Tolerance automatically triggers the creation of a new secondary virtual machine after failover, to ensure continuous protection to the application.

For users who require even greater levels of high availability than VMware HA can provide, 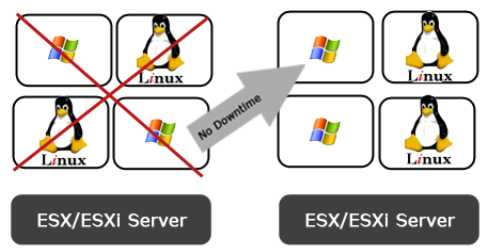 The two virtual machines access a common disk and appear as a single entity, with a single IP address and a single MAC address to other applications. Only the primary is allowed to perform writes.

The two virtual machines constantly heartbeat against each other and if either virtual machine instance loses the heartbeat, the other takes over immediately. The heartbeats are very frequent, with millisecond intervals, making the failover instantaneous with no loss of data or state.

In the event of multiple host failures-say, the hosts running both the primary and secondary VMs failed-VMware HA will reboot the primary VM on another available server, and VMware FT will automatically create a new secondary VM. Again, this ensures protection for the primary VM at all times. VMware FT can work in conjunction with VMotion, but it cannot work with DRS, so DRS must be manually disabled on VMs that are protected with VMware FT.