To convert a dynamic disk to a basic disk:

Windows XP Professional supports the FAT, FAT32 and NTFS file systems. A computer can contain a combination of file systems but each file system must be located on a separate partition or volume.

Note: You can convert a disk from the FAT and FAT32 file to NTFS at any time without data loss by using the convert .command from a command prompt and using the fs:/ntfs switch. When you format the data on the disk is lost.

EFS is a feature that was introduced with Windows 2000 and can be used to encrypt files and folders on NTFS volumes. When a user encrypts a file, only that user will be able to use the file. They can use the encrypted file without having to decrypt the file first. EFS can be implemented from Windows Explorer or from the command prompt using the Cipher command. The syntax for the cipher command is:

For a list of Cipher command switches see Table 2.3.

2.8.3.1: Recovering an Encrypted Folder or File

If the owner's private key is unavailable due to disk failure or any other reason, a designated recovery agent can open the file by using his or her own private key. The default recovery agent is the Administrator account for the local computer. If the recovery agent designation changes, then access to the file is denied. For this reason, it is recommended that you keep recovery certificates and private keys until all files that are encrypted by using those recovery certificates and private keys have been updated. One or more users, typically administrator-level accounts, can be designated as data recovery agents through Local Policy on stand-alone computers or through Group Policy in a domain. Data Recovery Agents (DRAs) are issued recovery certificates with public and private keys that are used for EFS data recovery operations. By default, in a domain, the EFS recovery policy designates the highest-level administrator account as the DRA on the first domain controller installed in the domain. Different DRAs can be designated by changing the EFS recovery policy, and different recovery policies can be configured for different parts of an enterprise. In Windows 2000, DRAs were required to implement EFS. In Windows XP, they are optional. Microsoft recommends that all stand-alone or domain environments have at least one designated DRA.

2.8.3.2: Backing Up and Restoring Encrypted Files or Folders

Encrypted files and folders remained encrypted when you back them up. Backup files remain encrypted when transferred across the network or when copied or moved onto any storage medium, including non-NTFS volumes. If you restore backup files to NTFS volumes in Windows 2000 or Windows XP, they remain encrypted. Along with providing effective disaster recovery, backups can also be used to securely move files between computers and sites. Opening restored, encrypted files is no different from decrypting and opening any other encrypted files. However, if files are restored from backup onto a new computer, or at any location where the user's profile, and thus the private key that is needed to decrypt the files, is not available, the user can import an EFS certificate and private key. After importing the certificate and private key, the user can decrypt the files. A data recovery agent can also be used to decrypt a file for the user, if the user is unable to decrypt the file.

The Disk Management tool can be used to mount local drives to an empty folder on an NTFS volume. This empty folder becomes the mount point. When a physical disk is mounted to a folder, it is assigned a drive path rather than a drive letter. The Administrator can identify and manage volume mount points by using the mountvol.exe command-line tool. To mount a drive:

Windows XP Professional supports file and folder level compression. Compressed files can be read and written to by any Windows-based or MS-DOS-based application without first having to be uncompressed by another program. When you access a file via a Windows-based or MS-DOS-based application, NTFS automatically decompresses the file. When you save or close the file again, NTFS compresses it again. Therefore NTFS allocates disk space based on the uncompressed file size and not on the compressed file size. 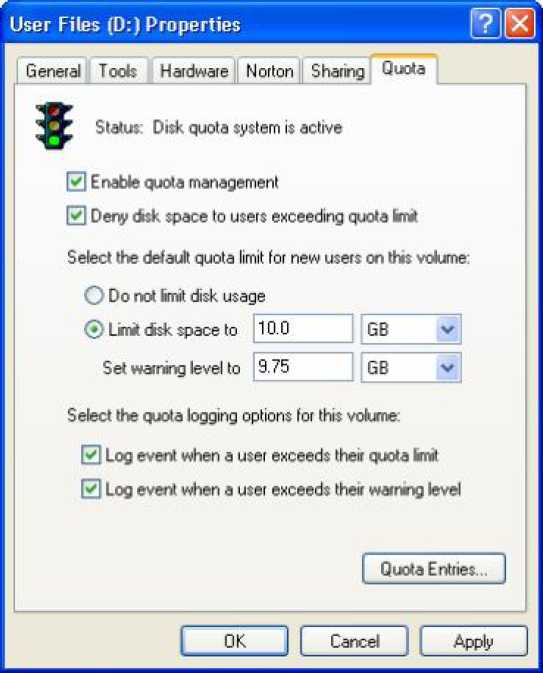 Figure 2.1: The Quota Tab of the Properties Dialog Box

Performing regular back ups of the data on hard disks prevents data loss due to disk drive failures, power outages, virus infections, and other such incidents. If data loss occurs, and you have performed regular backup jobs, you can restore the lost data.

Windows XP Professional provides Backup And Recovery Tools. This includes the Backup Wizard, which you can use to easily back up and restore data. To launch Backup

You can use Backup to back up data manually or you can schedule regular unattended backup jobs. You can back up data to a file or to a tape. Files can be stored on hard disks, removable disks, and recordable compact discs and optical drives.

To successfully back up and restore data on a Windows XP Professional computer, you must have the appropriate permissions and user rights

Backup Wizard provides five types of backup that define which data is backed up. Some backup types use backup markers, also known as archive bits, which mark a file as having changed. When a file changes, an attribute is set on the file that indicates that the file has changed since the last backup. When you back up the file, this clears or resets the attribute.

To back up the system state data on a local computer, do one of the following:

To restore files and folders without using the wizard, open the Backup utility, and specify the folders or files to restore; a restore location; and the Restore options, such as whether to replace existing files with backup files.

Note: To avoid data loss and to preserve file and folder features, such as encryption and permissions, you should not restore data that is archived from a NTFS version 5 volume to a FAT, FAT32 or NTFS version 4 volume.