As is often the case, one of the best tools for information security personnel has always been knowledge. To secure and defend a network and the information systems on that network properly, security personnel need to know what they are up against. What types of attacks are being used? What tools and techniques are popular at the moment? How effective is a certain technique? What sort of impact will this tool have on my network? Often this sort of information is passed through white papers, conferences, mailing lists, or even word of mouth. In some cases, the tool developers themselves provide much of the information in the interest of promoting better security for everyone. Information is also gathered through examination and forensic analysis, often after a major incident has already occurred and information systems are already damaged. 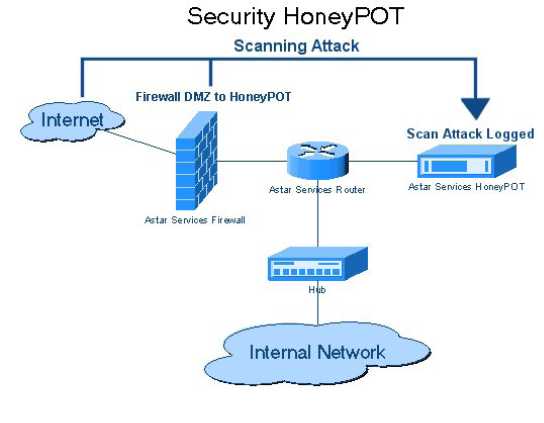 One of the most effective techniques for collecting this type of information is to observe activity first-hand- watching an attacker as she probes, navigates, and exploits his way through a network. To accomplish this without exposing critical information systems, security researchers often use something called a honeypot.

A honeypot, sometimes called a digital sandbox, is an artificial environment where attackers can be contained and observed without putting real systems at risk. A good honeypot appears to an attacker to be a real network consisting of application servers, user systems, network traffic, and so on, but in most cases it's actually made up of one or a few systems running specialized software to simulate the user and network traffic common to most targeted networks. Figure 11-12 illustrates a simple honeypot layout in which a single system is placed on the network to deliberately attract attention from potential attackers.

There are many honeypots in use, specializing in everything from wireless to denialof-service attacks; most are run by research, government, or law enforcement organizations. Why aren't more businesses running honeypots? Quite simply, the time and cost are prohibitive. Honeypots take a lot of time and effort to manage and maintain and even more effort to sort, analyze, and classify the traffic the honeypot collects. Unless they are developing security tools, most companies focus their limited security efforts on preventing attacks, and in many cases, companies aren't even that concerned with detecting attacks as long as the attacks are blocked, are unsuccessful, and don't affect business operations. Even though honeypots can serve as a valuable resource by luring attackers away from production systems and allowing defenders to identify and thwart potential attackers before they cause any serious damage, the costs and efforts involved deter many companies from using honeypots.

Arguably one of the first and most important network security tools is the firewall. A firewall is a device that is configured to permit or deny network traffic based on an established policy or rule set. In their simplest form, firewalls are like network traffic cops; they determine which packets are allowed to pass into or out of the network perimeter. The term firewall was borrowed from the construction field, in which a fire wall is literally a wall meant to confine a fire or prevent a fire's spread within or between buildings. In the network security world, a firewall stops the malicious and untrusted traffic (the fire) of the Internet from spreading into your network. Firewalls control traffic flow between zones of network traffic; for example, between the Internet (a zone with no trust) and an internal network (a zone with high trust).

With the dramatic proliferation of Internet traffic and the push to provide Internet access to every desktop, many corporations have implemented content-filtering systems to protect them from employees' viewing of inappropriate or illegal content at the workplace and the subsequent complications that occur when such viewing takes place.

Internet content filtering is also popular in schools, libraries, homes, government offices, and any other environment where there is a need to limit or restrict access to undesirable content. In addition to filtering undesirable content, such as pornography, some content filters can also filter out malicious activity such as browser hijacking attempts or crosssite-scripting attacks. In many cases, content filtering is performed with or as a part of a proxy solution as the content requests can be filtered and serviced by the same device. Content can be filtered in a variety of ways, including via the requested URL, the destination system, the domain name, by keywords in the content itself, and by type of file requested.

A protocol analyzer (also known as a packet sniffer, network analyzer, or network sniffer) is a piece of software or an integrated software/hardware system that can capture and decode network traffic. Protocol analyzers have been popular with system administrators and security professionals for decades because they are such versatile and useful tools for a network environment. From a security perspective, protocol analyzers can be used for a number of activities, such as the following:

From a network administration perspective, protocol analyzers can be used for activities such as these:

Regardless of the intended use, a protocol analyzer must be able to see network traffic in order to capture and decode it. A software-based protocol analyzer must be able to place the NIC it is going to use to monitor network traffic in promiscuous mode (sometimes called promise mode). Promiscuous mode tells the NIC to process every network packet it sees regardless of the intended destination. Normally, a NIC will process only broadcast packets (that are going to everyone on that subnet) and packets with the NIC's Media Access Control (MAC) address as the destination address inside the packet. As a sniffer, the analyzer must process every packet crossing the wire, so the ability to place a NIC into promiscuous mode is critical.

One of the biggest challenges in securing a network can be simply knowing what is connected to that network at any given point in time. For most organizations, the "network" is a constantly changing entity. While servers may remain fairly constant, user workstations, laptops, printers, and network-capable peripherals may connect to and then disconnect from the network on a daily basis, making the network at 3 AM look quite different than the network at 10 AM. To help identify devices connected to the network, many administrators use networking mapping tools.

Network mappers are tools designed to identify what devices are connected to a given network and, where possible, the operating system in use on that device. Most network mapping tools are "active" in that they generate traffic and then listen for responses to determine what devices are connected to the network. These tools typically use the ICMP or SNMP protocol for discovery and some of the more advanced tools will create a "map" of discovered devices showing their connectivity to the network in relation to other network devices. A few network mapping tools have the ability to perform device discovery passively by examining all the network traffic in an organization and noting each unique IP address and MAC address in the traffic stream.

The bane of users and system administrators everywhere, spam is essentially unsolicited or undesired bulk electronic messages. While typically applied to e-mail, spam can be transmitted via text message to phones and mobile devices, as postings to Internet forums, and by other means. If you've ever used an e-mail account, chances are you've received spam.