The foundation for a layered network security approach usually starts with a well secured system, regardless of the system's function (whether it's a user PC or a corporate e-mail server). A well-secured system uses up-to-date application and operating system patches, well-chosen passwords, the minimum number of services running, and restricted access to available services. On top of that foundation, you can add layers of protective measures such as antivirus products, firewalls, sniffers, and IDSs. Some of the more complicated and interesting types of network/data security devices are IDSs, which are to the network world what burglar alarms are to the physical world. The main purpose of an IDS is to identify suspicious or malicious activity, note activity that deviates from normal behavior, catalog and classify the activity, and, if possible, respond to the activity. This Leading the way in IT testing and certification tools, www.testking.com chapter looks at the history of IDSs and various types of IDSs, considers how they work and the benefits and weaknesses of specific types, and what the future might hold for these systems. You'll also look at some topics complementary to IDSs: malware protection, traffic shaping/filtering, and honey pots

As mentioned, an IDS is somewhat like a burglar alarm. It watches the activity going on around it and tries to identify undesirable activity. IDSs are typically divided into two main categories, depending on how they monitor activity: 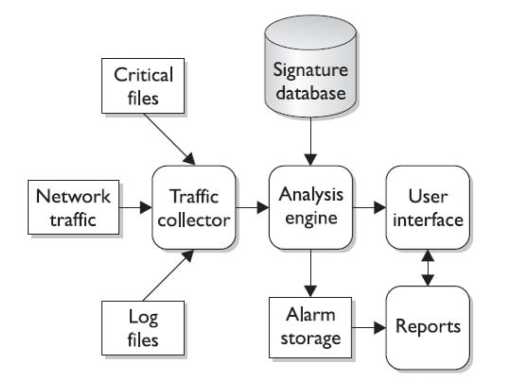 Whether or not it is network- or host-based, an IDS will typically consist of several specialized components working together, as illustrated in Figure 11-2. These components are often logical and software-based rather than physical and will vary slightly from vendor to vendor and product to product. Typically, an IDS will have the following logical components:

This component collects activity/events for the IDS to examine. On host-based IDS, this could be log files, audit logs, or traffic coming to or leaving a specific system. On a network-based IDS, this is typically a mechanism for copying traffic off the network link-basically functioning as a sniffer. This component is often referred to as a sensor.

Analysis engine: This component examines the collected network traffic and compares it to known patterns of suspicious or malicious activity stored in the signature database. The analysis engine is the "brains" of the IDS.

User interface and reporting: This component interfaces with the human element, providing alerts when appropriate and giving the user a means to interact with and operate the IDS.

Most IDSs can be tuned to fit a particular environment. Certain signatures can be turned off, telling the IDS not to look for certain types of traffic.

The first IDSs were host-based and designed to examine activity only on a specific host. A host-based IDS (HIDS) examines log files, audit trails, and network traffic coming in to or leaving a specific host. HIDS can operate in real time, looking for activity as it occurs, or in batch mode, looking for activity on a periodic basis. Host-based systems are typically self-contained, but many of the newer commercial products have been designed to report to and be managed by a central system. Host-based systems also take local system resources to operate. In other words, a HIDS will use up some of the memory and CPU cycles of the system it is protecting. Early versions of HIDS ran in batch mode, looking for suspicious activity on an hourly or daily basis, and typically looked only for specific events in the system's log files. As processor speeds increased, later versions of HIDSs looked through the log files in real time and even added the ability to examine the data traffic the host was generating and receiving.

Most HIDS focus on the log files or audit trails generated by the local operating system. On UNIX systems, the examined logs usually include those created by syslog such as messages, kernel logs, and error logs. On Windows systems, the examined logs are typically the three event logs: Application, System, and Security. Some HIDS can cover specific applications, such as FTP or web services, by examining the logs produced by those specific applications or examining the traffic from the services themselves. Within the log files, the HIDS is looking for certain activities that typify hostile actions or misuse, such as the following: 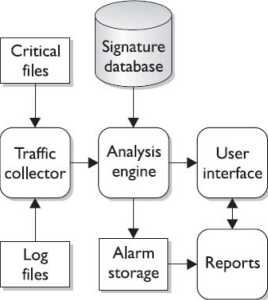 In general, most HIDSs will operate in a very similar fashion. (Figure 11-3 shows the logical layout of a HIDS.) By considering the function and activity of

sting and certification tools, WWW, testkina. com each component, you can gain some insight into how HIDSs operate.

The analysis engine is perhaps the most important component of the IDS, as it must decide what activity is "okay" and what activity is "bad." The analysis engine is a sophisticated decision and pattern-matching mechanism-it looks at the information provided by the traffic collector and tries to match it against known patterns of activity stored in the signature database. If the activity matches a known pattern, the analysis engine can react, usually by issuing an alert or alarm. An analysis engine may also be capable of remembering how the activity it is looking at right now compares to traffic it has already seen or may see in the near future so that it can match more complicated, multistep malicious activity patterns. An analysis engine must also be capable of examining traffic patterns as quickly as possible, as the longer it takes to match a malicious pattern, the less time the IDS or human operator has to react to malicious traffic. Most IDS vendors build a "decision tree" into their analysis engines to expedite pattern matching.

The signature database is a collection of predefined activity patterns that have already been identified and categorized-patterns that typically indicate suspicious or malicious activity. When the analysis engine has a traffic pattern to examine, it will compare that pattern to the appropriate signatures in the database. The signature database can contain anywhere from a few to a few thousand signatures, depending on the vendor, type of IDS, space available on the system to store signatures, and other factors. The user interface is the visible component of the IDS-the part that humans interact with. The user interface varies widely depending on the product and vendor and could be anything from a detailed GUI to a simple command line. Regardless of the type and complexity, the interface is provided to allow the user to interact with the system: changing parameters, receiving alarms, tuning signatures and response patterns, and so on.

Most IDSs can be distinguished by how they examine the activity around them and whether or not they interact with that activity. This is certainly true for HIDSs. On a passive system, the IDS is exactly that-it simply watches the activity, analyzes it, and generates alarms. It does not interact with the activity itself in any way, and it does not modify the defensive posture of the system to react to the traffic. A passive IDS is similar to a simple motion sensor-it generates an alarm when it matches a pattern much as the motion sensor generates an alarm when it sees movement.

An active IDS will contain all the same components and capabilities of the passive IDS with one critical exception-the active IDS can react to the activity it is analyzing. These reactions can range from something simple, such as running a script to turn a process on or off, to something as complex as modifying file permissions, terminating the offending processes, logging off specific users, and reconfiguring local capabilities to prevent specific users from logging in for the next 12 hours.