The Basics of Public Key Infrastructures 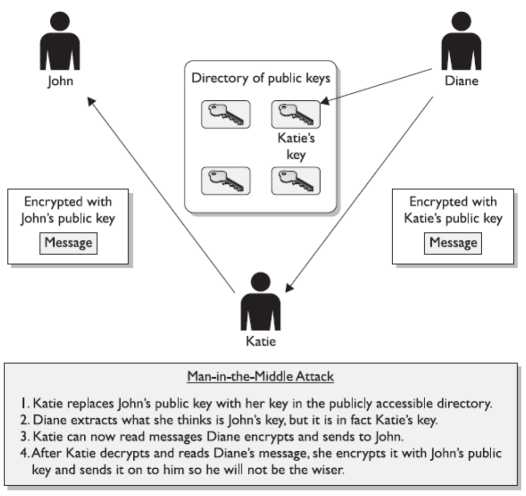 A PKI provides all the components necessary for different types of users and entities to be able to communicate securely and in a predictable manner. A PKI is made up of hardware, applications, policies, services, programming interfaces, cryptographic algorithms, protocols, users, and utilities. These components work together to allow communication to take place using public key cryptography and asymmetric keys for digital signatures, data encryption, and integrity. Although many different applications and protocols can provide the same type of functionality, constructing and implementing a PKI boils down to establishing a level of trust.

If, for example, John and Diane want to communicate securely,

John can generate his own public/private key pair and send his public key to Diane, or he can place his public key in a directory that is available to everyone. If Diane receives John's public key, either from him or from a public directory, how does she know it really came from John? Maybe another individual is masquerading as John and replaced John's public key with her own. If this took place, Diane would believe that her messages could be read only by John and that the replies were actually from him. However, she would actually be communicating with Katie. What is needed is a way to verify an individual's identity, to ensure that a person's public key is bound to their identity and thus ensure that the previous scenario (and others) cannot take place.

In PKI environments, entities called registration authorities and certificate authorities (CAs) provide services similar to those of the Department of Motor Vehicles (DMV). When John goes to register for a driver's license, he has to prove his identity to the DMV by providing his passport, birth certificate, or other identification documentation. If the DMV is satisfied with the proof John provides (and John passes a driving test), the DMV will create a driver's license that can then be used by John to prove his identity. Whenever John needs to identify himself, he can show his driver's license. Although many people may not trust John to identify himself truthfully, they do trust the third party, the DMV.