Symmetric encryption is the older and simpler method of encrypting information. The basis of symmetric encryption is that both the sender and the receiver of the message have previously obtained the same key. This is, in fact, the basis for even the oldest ciphers-the Spartans needed the exact same size cylinder, making the cylinder the "key" to the message, and in shift ciphers both parties need to know the direction and amount of shift being performed. All symmetric algorithms are based upon this shared secret principle, including the unbreakable one-time pad method.

DES, the Data Encryption Standard, was developed in response to the National Bureau of Standards (NBS), now known as the National Institute of Standards and Technology (NIST), issuing a request for proposals for a standard cryptographic algorithm in 1973. NBS received a promising response in an algorithm called Lucifer, originally developed by IBM. The NBS and the NSA worked together to analyze the algorithm's security, and eventually DES was adopted as a federal standard in 1976.

NBS specified that the DES standard had to be recertified every five years. While DES passed without a hitch in 1983, the NSA said it would not recertify it in 1987. However, since no alternative was available for many businesses, many complaints ensued, and the NSA and NBS were forced to recertify it. The algorithm was then recertified in 1993. NIST has now certified the Advanced Encryption Standard (AES) to replace DES.

DES is what is known as a block cipher; it segments the input data into blocks of a specified size, typically padding the last block to make it a multiple of the block size required. In the case of DES, the block size is 64 bits, which means DES takes a 64-bit input and outputs 64 bits of ciphertext. This process is repeated for all 64-bit blocks in the message. DES uses a key length of 56 bits, and all security rests within the key. The same algorithm and key are used for both encryption and decryption.

Triple DES (3DES ) is a variant of DES. Depending on the specific variant, it uses either two or three keys instead of the single key that DES uses. It also spins through the DES algorithm three times via what's called multiple encryption. Multiple encryption can be performed in several different ways. The simplest method of multiple encryption is just to stack algorithms on top of each other-taking plaintext, encrypting it with DES, then

Leading the way in IT testing and certification tools, www.testking.com

DES keys, NIST put out a request for proposals for a new Advanced Encryption Standard (AES). It called for a block cipher using symmetric key cryptography and supporting key sizes of 128, 192, and 256 bits. After evaluation, the NIST had five finalists:

In the fall of 2000, NIST picked Rijndael to be the new AES. It was chosen for its overall security as well as its good performance on limited capacity devices. Rijndael's design was influenced by Square, also written by John Daemen and Vincent Rijmen. Like Square, Rijndael is a block cipher separating data input in 128-bit blocks. Rijndael can also be configured to use blocks of 192 or 256 bits, but AES has standardized on 128-bit blocks. AES can have key sizes of 128, 192, and 256 bits, with the size of the key affecting the number of rounds used in the algorithm. Like DES, AES works in three steps on every block of input data:

1. Add round key, performing an XOR of the block with a subkey.

2. Perform the number of normal rounds required by the key length.

3. Perform a regular round without the mix-column step found in the normal round.

After these steps have been performed, a 128-bit block of plaintext produes a 128-bit block of ciphertext. As mentioned in step 2, AES performs multiple rounds. This is determined by the key size. A key size of 128 bits requires 9 rounds, 192-bit keys will re quire 11 rounds, and 256-bit keys use 13 rounds. Four steps are performed in every round:

1. Byte sub. Each byte is replaced by its S-box substitute.

2. Shift row. Bytes are arranged in a rectangle and shifted.

3. Mix column. Matrix multiplication is performed based upon the arranged rectangle.

4. Add round key. This round's subkey is cored in.

These steps are performed until the final round has been completed, and when the final step has been performed, the ciphertext is output.

CAST is an encryption algorithm similar to DES in its structure. It was designed by Carlisle Adams and Stafford Tavares. CAST uses a 64-bit block size for 64- and 128-bit key versions, and a 128-bit block size for the 256-bit key version. Like DES, it divides the plaintext block into a left half and a right half. The right half is then put through function f and then is XORed with the left half. This value becomes the new right half, and the original right half becomes the new left half. This is repeated for eight rounds for a 64-bit key, and the left and right output is concatenated to form the ciphertext block.

RC2 was designed as a DES replacement, and it is a variable-key-size block-mode cipher. The key size can be from 8 bits to 1024 bits with the block size being fixed at 64 bits. RC2 breaks up the input blocks into four 16-bit words and then puts them through 18 rounds of one of two operations. The two operations are mix and mash. The sequence in which the algorithms works is as follows:

1. Initialize the input block to words R0 through R3.

RC5 is a block cipher, written in 1994. It has multiple variable elements, numbers of rounds, key sizes, and block sizes. The algorithm starts by separating the input block into two words, A and B.

A and B represent the ciphertext output. This algorithm is relatively new, but if configured to run enough rounds, RC5 seems to provide adequate security for current bruteforcing technology. Rivest recommends using at least 12 rounds. With 12 rounds in the algorithm, cryptanalysis in a linear fashion proves less effective than brute-force against RC5, and differential analysis fails for 15 or more rounds. A newer algorithm is RC6.

The output of A, B, C, and D after 20 rounds is the ciphertext. RC6 is a modern algorithm that runs well on 32-bit computers. With a sufficient number of rounds, the algorithm makes both linear and differential cryptanalysis infeasible. The available key lengths make brute-force attacks extremely time-consuming. RC6 should provide adequate security for some time to come.

Blowfish was designed in 1994 by Bruce Schneier. It is a block-mode cipher using 64- bit blocks and a variable key length from 32 to 448 bits. It was designed to run quickly on 32-bit microprocessors and is optimized for situations with few key changes. Encryption is done by separating the 64-bit input block into two 32-bit words, and then a function is executed every round. Blowfish has 16 rounds.

IDEA (International Data Encryption Algorithm) started out as PES, or Proposed Encryption Cipher, in 1990, and it was modified to improve its resistance to differential cryptanalysis and its name was changed to IDEA in 1992. It is a block-mode cipher using a 64-bit block size and a 128-bit key. The input plaintext is split into four 16-bit segments, A, B, C, and D.

This algorithm is fairly new, but all current cryptanalysis on full, eight-round IDEA shows that the most efficient attack would be to brute-force the key. The 128-bit key would prevent this attack being accomplished, given current computer technology. The only known issue is that IDEA is susceptible to a weak key-a key that is made of all 0s. This weak key is easy to check for, and the weakness is simple to mitigate.

Symmetric algorithms are important because they are comparatively fast and have few computational requirements. Their main weakness is that two geographically distant parties both need to have a key that matches exactly. In the past, keys could be much simpler and still be secure, but with today's computational power, simple keys can be brute-forced very quickly. This means that larger and more complex keys must be used and exchanged. This key exchange is difficult because the key cannot be simple, such as a word, but must be shared in a secure manner. It might be easy to exchange a 4-bit key such as b in hex, but exchanging the 128-bit key 4b36402c5727472d5571373d22675b4b is far more difficult to do securely. This exchange of keys is greatly facilitated by our next subject, asymmetric, or public key, cryptography. 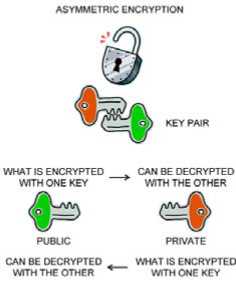