31 Discuss the differences between a public and a private WAN.

For implementing a Wide Area Network, connection has to be made between two areas, which are geographically apart. A dedicated link or the internet can be used to establish a link between networks. The most important consideration to be addressed at the very first stage of implementing a WAN is, whether a public or a private network is to be used. Analyzing private and public WAN's

Public Networks: Money is an important consideration when it comes to the decision of choosing between networking methods. A WAN can be set up using an existing transmission infrastructure. A public network can be established in two ways:

- By using the Public Switched Telephone Network (PSTN): The PSTN is the complete collection of all the interconnected telephone wires throughout the world. The elements of this system are all the equipment that is utilized while combining two points. The modern day PSTN's are digital in nature and use analog connections. The digital signals are converted to the analog mode by Modems. The shortcoming of using PSTN is: The transfer speed is restricted to 56 Mbps. This speed is unsuitable for managing features like videoconferencing, VoIP etc. The advantage of this is that it is inexpensive.

- The Internet: It is a popular method for setting up WAN connections. It is a reliable and a pocket friendly method for establishing connection between LAN's. VPN (Virtual Private Network) is the most common method of connecting LAN's. The internet is used to set up a communication tunnel between two ends. The advantage of using VPN, is that communication link can be set up using the internet on as and when basis. When no transmissions are required to be made the link can be dropped. The figure given below illustrates a VPN connection made over a public network. 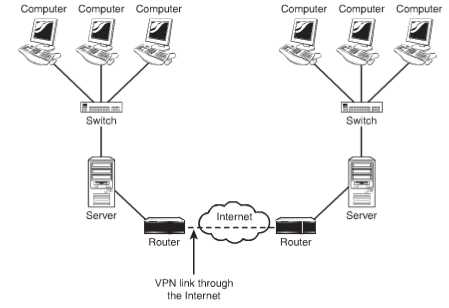 The advantages of using public networks are:

- Accessibility: It is available everywhere;

- The technologies required to configure public networks are easy to manage and be implemented;

- Most of the client operating systems support software necessary to create a VPN.

The disadvantages of using Public Networks are:

- Security is a compromised issue on a Public Network;

- Internet failures are commonly experienced hence affecting the reliability of a public network.

Private Networks: Private Networks are on of the best ways to make connection between two LAN's, but it presupposes that there are no budget limitations. Private Networks can be created using many technologies. A private network is built keeping the needs of the organization in mind. The resultant network can be simple, complex, expensive or inexpensive, secure or insecure. Fiber based networks are considered better on the consideration of security over networks using a copper base or even wireless networks.

The advantages of using Public Networks are:

- Security is never an issue with these systems;

- It offers a complete managed solution to the communication needs of a company.

The disadvantages of using Private Networks are:

- It is a costly affair as compared to the PSTN which is made available at a very nominal rate.

- Specialized staff is required to manage the network which further adds to the costs.

- As the network grows so does the complexity of the same.