While configuring, the first screen that one would come across is illustrated in the figure given below: 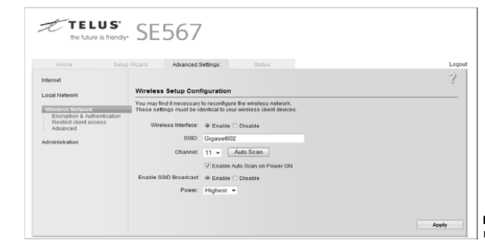 It is clear in the screen shot that settings for the wireless router are laid out. The connection is using an SSID password of Gigaset602 and channel as 11. All access points have similar configuration, though they may differ in the layout. Adjusting settings for troubleshooting or security reason can be done from the configuration screen. The settings used by an AP are:

- SSID: In the above screenshot, this configuration uses an SSID of Gigaset602. In a large network, this can be changed in order to facilitate identification of its locations or network segment. For the purposes of troubleshooting, it is essential to first ascertain that at both the ends the same SSID is being used. These may become incompatible when a computer is moved from one network to another. The system has to be rebooted to allow communication.

- Channel: In the above screenshot, the connection is set to use channel 11. For accessing this network, all systems would have to use this particular channel. A dropdown menu can be used to change the choice of channel.

- SSID Broadcast: In default settings, the SSID name is broadcast at fixed intervals. This permits the customers to discover the network. This also compromises on the important issue of security, as SSID's are not encrypted.

- WEP-open: This is simplest of three methods that can be used for authentication. It is a weak method and does not perform client verification.

- WEP-shared: This method requires that a WEP key be configured at both the ends. In this method authentication is mandatory. This system is relatively secure for wireless transmission.

- WPA-PSK: This is the strongest form of security available. In this method, keys are automatically changed and authenticated between devices. This is done after a specified period or after a specified number of packets has been transmitted.

- Wireless Mode: It is necessary that the client system use the identical wireless mode as the AP. Keeping the requirement of speed in mind, these days networks are configured 802 .11g or 802.1 1b/g as there is compatibility between the two.

- DTIM Period: Broadcasts can be made to all systems on a wireless network. Multicast or broadcast traffic refers to these multiple broadcast messages that are sent. The feature that all systems are awake to receive a broadcast message is termed as Delivery traffic indication message (DTIM). The settings of this particular feature specify how often the DTIM message is sent within the beacon frame. The default setting of this feature is 1. The setting 1 means that every beacon a DITM message will be sent.

- Maximum Connection Rate: The default setting for this feature is Auto. The auto setting permits maximum connection speed. The speed can be altered to enhance the distance that the signal covers and the strength of the signal.

- Network Type: This is where the choice between ad hoc or network is made.