Wireless Networks can be incorporated for a variety of networks in terms of shapes and sizes. Wireless Networks enable forming connection by using radio waves and not wires. Computers on wireless transceivers (transmitters and receivers) which are known as Access Point (AP) can move around in a premises and do need to be wired for use. Convenience, security and speed are some of the factors that have led to the development of these networks. Before we can understand how to implement a wireless network, it is important to understand wireless devices.

- Wireless Access Point: Wireless AP's do the work of both a transmitter and a receiver for WLAN radio signals. It is a separate device with a built in:

Access Points on a wireless network form a link between WLAN's and a wired Ethernet LAN. They have the advantage of supporting multiple ports, which allows for expanding networks. One or more than one AP may be required depending on the size of the network. There is a range up to which an AP can send a usable signal. This distance is controlled by the wireless standard that has been adopted for setting up the network. This distance is also controlled by factors like obstructions and environmental conditions. The figure given below illustrates configuration of a wireless network 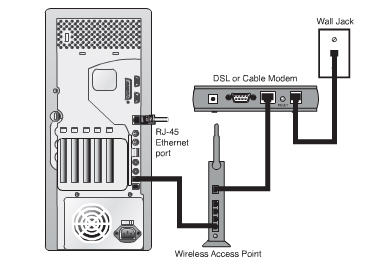 An AP is an integral part of the wireless infrastructure network design. The network for which wireless set up is being used can be a private Ethernet network or the internet. The following are important to be understood for the working of an AP.

- Service Set Identifier (SSID): This network name is required to set up connection with a wireless AP. It is like a group name that is used by 802.11 wireless networks for all systems that belong to the same network. It is mandatory for client stations to be configured with SSID in order to be authenticated to the AP. The AP broadcasts the SSID to all the wireless clients. Systems can be configured in a manner, where the SSID is issued by the administrator rather than it being done automatically.

- Basic Service Set (BSS): BSS is a term that is used to denote wireless networks using single AP and one or multiple clients connecting to the AP. Home offices generally follow this design.

- Extended Service Set (ESS): The connection formed when two or more BSS sets are connected it is known as an ESS. It uses multiple AP's. It is used for networks of a larger size. This permits the users to shift their position between BSS's without having to reconfigure every time they move.

- Extended Service Set Identifier (ESSID): Though there is some basic difference between ESSID and SSID can be used in place of each other. In an ESS setup all AP's may not be using the same name and it is the name given when ESS wireless network design is used. SSID is the name used with BSS networks.

- Basic Service Set Identifier (BSSID): The BSSID refers to the MAC address of the BSS AP. The BSSID is not to be confused with the SSID, which is the name of the wireless network.

- Basic Service Area (BSA): BSA is an important consideration when processes of troubleshooting or designing wireless networks have to be undertaken. It pertains to the coverage area of the AP. The BSA is controlled by multiple factors like the strength of the AP antenna, type of antenna and interference experienced in an area.

- Wireless Antennas: Wireless Communication cannot be imagined without wireless antennas. Depending upon the needs of the network the shape and size of the antenna has to be chosen. Selection of an antenna is an important factor while setting up a wireless network. The performance of the network depends to a great extent on the choice of antenna that has been made. The right antenna means saving on costs, better transmission, fewer antennas, and fewer access points. The basic tasks expected of an antenna are:

Types of Wireless Antennas: It is important to understand the coverage used by an antenna before selecting the type of an antenna to be used. The wireless environment controls the choice of the antenna. Typically, antennas are:

- Omnidirectional: It is useful where wave degrees are to be dispersed in 360 degree pattern. It is best suited where coverage is required in all directions. These antennas are used when broad based signals are required. It allows access from multiple locations. The disadvantage with this type of antenna is the signal is not very strong and hence remains limited to smaller distances. Omnidirectional antennas are preferred for home and small offices.

- Directional: These antennas are used when signal is to be concentrated in one particular direction. It transmits a focused signal, meaning a greater distance can be traveled with stronger signals between two points. These are best suited for point to point configurations; as they travel greater distance. These are preferred when transmission needs to be tunneled through a series of obstacles. A chartered path helps to concentrate and strengthen the signal. The figure given below illustrates both directional as well as omnidirectional antennas. 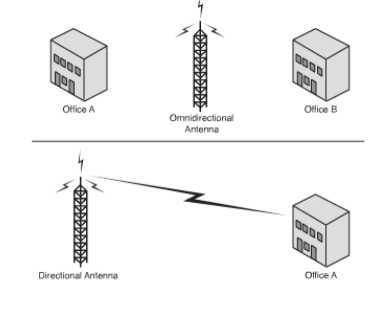 Data Rate versus Throughput: Data rate and Throughput are independent factors though very often these are used interchangeably. Every wireless standard has a data rate associated with it. For example, the standard 802.11b, has a data rate of maximum 11Mbps. Data Rate is the maximum rate at which data travels in a given network. The speed that a network finally gains is controlled by multiple factors like clients on a network, error recovery data, obstructions etc. Collisions affect the ultimate data rate to a great extent.