Safety is one of the major concerns while working with computers. You must be careful about the potential hazards such as heat, electricity, and electrostatic discharge that can harm both you and the computer systems. The safety at workplace refers to the safety measures that are taken at your workplace while using computer components.

Any type of equipment that that can herm the environment or the peoples using it has Material Safety Data Sheets (MSDS) associated with it. These MSDS are created by manufacturers. You can obtain them either from the manufacturer or the environmental protection agency at www.epa.gov.

The Electrostatic Discharge (ESD) occurs when there is an imbalance of electrons on a surface or in environment. The imbalance of electrons creates an electric field that affects the objects round it. ESD usually occurs by rubbing objects with each other. For example if you rub your feet on a carpet and then touch a light switch then ESD will occur and you will feel an electrical shock. This is because the two objects will try to exchange electrons in order to standardize the electrostatic charge between them. The object with higher charge passes the voltage to the object with lower charge.

Just by sitting on chair you generate 100 volts of static discharge. Rubbing your shoe sole on a carpet can generate 20,000 volts. The lowest-static voltage shock that humans can feel is around 3,000 volts. However, this shock can not electrocute a person because there is extremely little current. But a computer component can be destroyed with as little charge as 80 volts. The thousands of volts of ESD occurring in human body can damage electrical components without you even realizing it.

To protect devices from electrostatically induced damages, you can use: 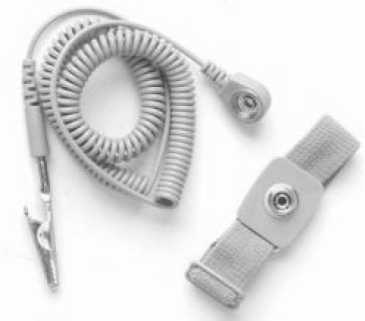 The computer devices such as CRT monitors and power supply carry high voltages. Monitors and power supplies hold the charge for a long time even after the power is disconnected. A CRT monitor has a high-voltage anode inside it that may carry a charge of up to 25,000 volts. While working with CRT monitors or to make some internal adjustments to them, it's safe to discharge them first. If you don't discharge the monitor you can get electrocuted.

Power supplies also contain lethal charges even after disconnecting them from power plugs. This is because they contain several capacitors that can hold electricity. It is therefore extremely dangerous to open the case of a power supply. Instead of opening them and repairing them it is always recommended to replace them because they are not expensive also besides being dangerous.

At your workplace, many times it becomes your requirement to move equipments from one place to another usually when you shift or office or place of work or for any other reason. While moving computer equipments, remove all cables and move them in such a way that you do not harm them. Moving them in abundance may damage them

While moving computer equipment from one place to another, make sure that you use carts for heavy objects and the path that you are using for taking these object is free of safety hazards otherwise you may fall and hurt yourself. You should always lift equipments by bending knees and not the waist. Monitors should be carried with the glass facing towards your body.

The electric circuits these days come fitted with a circuit breaker fuse system so that the switch can be tripped, if a fault develops. A Circuit breaker detects electrical leakages through the earthing of the equipment. It is of utmost importance that all electrical appliances having a metal body are properly earthed. In case of an electrical leakage, the current the whole metal body of an appliance will be electrified and anyone who touches the apparatus at this time will be electrocuted.

Sometimes a situation called nuisance tripping occurs where the tripping occurs often without any serious condition. The surge protectors can help in reducing the nuisance trips. A surge protector protects electrical devices from voltage spikes by regulating the voltage supplied to the device by either blocking or by shorting to ground voltages above a safe threshold. The surge protectors are usually built into UPS systems. However, if your UPS does not have it then you can add it to the outlet of the UPS to protect it from damage.

One thing that you should be careful about is not plugging your computer or UPS into a ground fault circuit interrupter (GFCI) receptacle. This is because GFCIs are intended to be used in wet places and they trip very easily.

Liquids are very good conductors of electricity and can cause electric currents and severe damages if spilled between electrical equipments. Certain special purpose liquids are however exceptionally used to clean electrical equipments. For example cleaning alcohol and denatured isopropyl alcohol is commonly used for cleaning motherboard and electronic connectors on expansion cards. The denatured isopropyl alcohol removes oxidation from the connectors and pin contacts of PCBs.

The dust and other air borne contaminators can be pulled into computers and set themselves inside. As they build up they hinder the fans ability to reduce heat and cause the components inside the computer case to become hotter. The heat inside a system causes Chip creep, which is a phenomenon of gradually loosing of a chip from its socket as a result of expansion and contraction due to system heat up and cool down.

To fix chip creep, users of older systems would often have to remove the case cover and push the loose chip back into the CPU socket. To remove dust from inside of computers you can use compressed air blown in short bursts. Compressed air cans should be held 23 inches from the system and should always be used upright to ensure that the content is released as gas.