Section 4.1: The Basics of networking

There can be two most common types of networks, peer-to-peer and client/server. The peer-to-peer network is also called a workgroup in which two or more computers are connected together to share resources such as files and printers. This type of network is usually small and used for home office or small office connectivity. They are also less expensive because you need only cables and network cards to establish connectivity.

They however, provide limited functionality.

The Client-Server network on the other hand can be huge networks and are used to provide central control of resources and wide variety of functions. They contain one or more server computers and client computers. The server is responsible for authenticating users and providing access to resources to the client computers.

The network computers, servers, or interfaces in a network that are connected with each other and possess a unique IP address on a TCP/IP address are also considered as the host computers. The thin clients that do not boot on their own and depend on servers also exist in some networks.

Based on the on the physical layout or the topology of the network, there are three types of networks, LAN, WAN, and MAN. The Local Area Network or LAN is used to connect multiple users in a relatively small geographical area to exchange files other shared resources. Because they do not span in large area they usually offer high networking speed. WAN or Wide area network is an interconnection between various LAN's and unites geographically distributed users. MAN or Metropolitan Area Network is an interconnection between various LAN's in a particular geographical area like a metropolitan city like New York.

The computer networks can be wired or wireless. The wired networks communicate with the help of cables and the network interface Card (NIC). When networks are big the routers are used to connect the LANs together. The router is also used to connect dissimilar topologies that use the same protocol because the physical specifications don't apply.

Networks also use gateway, which is an interconnecting system that connects two networks that use different base protocols.

1.Layer 1ŚPhysical layer: This layer is made up of physical data components that you can touch such as: connectors, cable, cards, and terminators and so on. It is responsible for bit-level transmission between network nodes.

2.Layer 2ŚData Link layer: This layer takes data from the upper layers and prepares it send across the physical layer. It is responsible for communications between adjacent network nodes.

3.Layer 3ŚNetwork layer: This layer is responsible for the flow of data from the source to the destination. It establishes paths for data transfer through the network. Routers operate at this layer

6.Layer 6ŚPresentation layer: This layer translates data between the application layer and all layers above it. It defines the syntax which two network hosts use to communicate. IT performs encryption and compression.

7. Layer 7ŚApplication layer: This layer is responsible for providing end-user services. All data originates from here before going across the network. It is responsible for file transfers, electronic messaging, and network management, as shown in Figure 62. 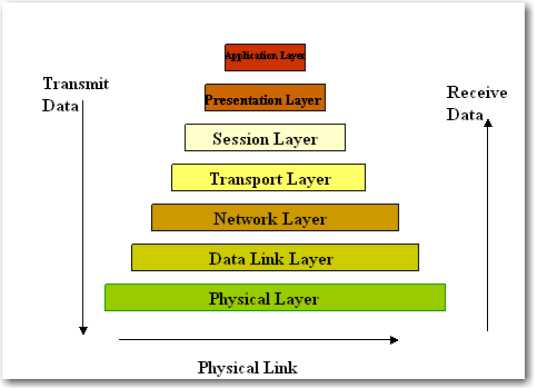