Before you configure windows on your computer, it is important to prepare your computer for the installation of your windows the preparation includes partitioning and formatting the hard drive, and then installing the pre requisites.

The partitioning refers to creating large divisions of hard drive. A partition is a continuous section of sectors that are next to each other. A partition is referred to by a drive letter such as C: or D: Partitions can be made using the FDISK command or through the operating system. The partitioned drive appears as two or more physical hard drives. The partition information is contained in a special file called Master Boot Record (MBR) that resides in the first sector of each hard drive.

After partitioning the hard drive you must format it so that an operating system can be loaded on it. Formatting is the process of creating and configuring a File Allocation Table (FAT) and creating a root directory. Formatting allows a hard disk to hold files and programs. The formatting briefly scans the hard drive to find any possible bad spots and marks the area as bad sectors. The hard disk or each partition can be formatted with either FAT16, FAT32 file system or NTFS, NTFS 5.0 file system.

FAT32 File System: The FAT32 was introduced with the release of Windows 95. It was quiet similar to FAT16 but was more advanced. It supports larger drives and smaller allocation units. It is however, not compatible with earlier versions of Windows such as Windows 3x and Windows 95.

Once the disk is formatted, it can store files and folders. Each file that is created in Windows has to follow certain file naming conventions. For example a file name can be up to 255 characters and must have an extension that is used to identify the file type. The file name must not contain special characters such as (/,, .). The file names are not case sensitive and you cannot store duplicate file names in a directory.

The files in Windows can be stored in a folder that is quite similar to a physical file cabinet. The path of file indicates the complete location of a file. Although, files and folders can be created in Windows through Windows Explorer, you can also create them from the command prompt by typing DOS commands such as MD (to make a directory).

You can change the file and folder permissions by changing the attributes of a file or folder and make them read only or hidden. You can also configure indexing, archiving, encryption, and compression settings on files that reside on NTFS volume.

The attended installation on the other hand can be done through CD, DVD or any other installation media. It is a quick way to perform installation because you don't have to depend upon the network bandwidth.

Sometimes even after inserting a bootable media to the CD/DVD ROM drive, you computer is not able to boot from the installation CD. In such a scenario, it is important that you go into the BIOS settings of the computer to change the boot sequence of the computer. You need to set the DVD/CD ROM to be your first bootable device.

Windows Vista, however, allows you to proceed with the installation without providing the License key and trying the system for 30 days, as shown in Figure 61. After which, you will not be able to use the system if you have not activated your copy of License with Microsoft. Unlike other Windows operating systems, Windows Vita provides you all versions of Windows Vista in one DVD only, so that you can upgrade to any version anytime you desire by just purchasing the license for that version. 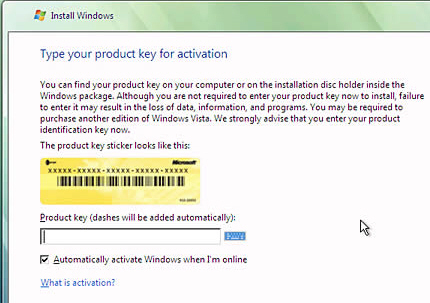 The device drivers are not updated automatically. They are optional updates but are important for better performance of the devices. The rolling back of drivers may be required if a wrong version of a driver is installed. However, it is only possible if a previously installed driver has been updated.

The drivers can be installed, upgrade, or rollback through Device Manager applet window that appears on clicking Start->Settings->Control Panel-> Administrative Tools->Computer Management->Device Manager.

Section 3.3.6: Upgrading or Migrating an OS

The upgrade however, has a drawback that the users have to stick to their old hardware. If your computer has a number of junk data and junk settings then the things will become messier after an upgrade. This problem can be solved by migrating to a newer version of an operating system instead of upgrading to a newer version

The Migration has all the benefits of an upgrade and a clean installation. You don't have to stick to the old hardware for migration. You can perform a clean install on new hardware and then migrate all the configurations and settings of the older computer to the newer computer.

Windows uses two types of memories, RAM and Virtual Memory. The RAM is the physical memory that is installed on the computer in the form of a chip. The virtual memory on the other hand is formed with the combination of RAM and the memory on the hard disk (paging file). The virtual memory allows a computer to run than it has physical RAM for. The virtual memory can increase the performance of the system by allowing the RAM to hold more files than it can support for quicker access. However, the performance can only be increased if the system has memory that is not used by applications. The memory problems on a system can be identified by watching performance counters.

Sometime while upgrading or migrating your computer due to electricity failure or due to some other problem, you Windows installation will not work. In such a scenario, it is possible in certain OSs such as Windows XP and Windows Vista to repair the install.

To repair the installation of Windows XP, you need to Boot from your Windows XP CD and press Enter when you see the message "To set up Windows XP now, press ENTER". On the Windows XP Licensing Agreement screen, press F8 to agree to the license

agreement. Next, make sure that your current installation of Windows XP is selected in the box, and then press R to repair Windows XP.

Power management refers to the Power management settings that enable you to conserve energy or make best use of power when your computer is running. The OSs provides different power management modes that actually simulate system shutdown, when it is not in use. However, they quickly switch from low power usage to normal power usage as soon as you get back to work or when certain wake events from a device, application, or network connection occur.

ACPI has defined Power Management states for multiple levels of the system such as, global states and system states. The Global States are defined as follows:

While shutting down your computer, you can put your Windows XP computer to two important Power states. These states are:

The following events are supported to wake a computer from a low power state:

The sleep timers allow you to auto-start up and shutdown your computer at a specified date and time, even if the system was stopped in hibernation.