The computers these days are high performance and consume a huge amount of power that generates heat. The computer needs to be cooled down and should be kept within a specified temperature range to prevent overheating, instability, malfunction and damage leading to a shortened component lifespan.. A computer has many power consumer components that have their own cooling systems such as CPU that uses heat sink to cool it and some video cards that have their own built-in fans. Some cooling methods used in computers are: 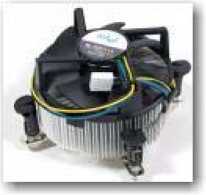