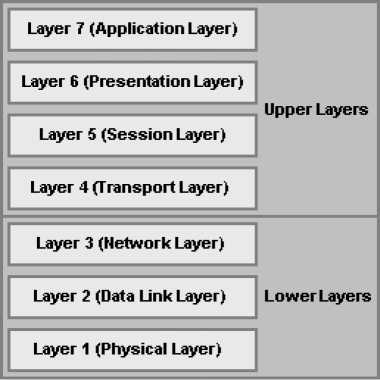 The Open Systems Interconnection (OSI) reference model was developed by the International Standards Organization (ISO) in 1984 to define network communications, and describe the flow of data on a network. The OSI reference model consists of seven layers that start with the physical connection and end with the application. As illustrated in the figure shown, the seven OSI layers are:

Each layer performs particular functions and can have one ore more sublayers. The upper layers of the OSI reference model define functions focused on the application, while the lower three layers define functions to facilitate the transport and delivery of data from the source to the destination.

Examples of physical layer specifications include:

The Data-Link Layer deals with the reliable transport of data across one particular link or medium. Data at the data link layer is encapsulated into frames. Data-link specifications deal with the sequencing of frames, flow control, synchronization, error notification, physical network topology, and physical addressing. At this layer, data is converted from frames into bits when it is sent across the physical media and is converted back into frames when it is received from the physical media. Bridges and switches operate at the data-link layer.

Examples of data-link layer technologies include:

The Network Layer deals with the routing of data, which is called packets at this layer, and defines the methods to facilitate this, including how routing works, logical addressing, how routes are learned; as well as how packets are fragmented into smaller packets to accommodate media with smaller maximum transmission unit (MTU) sizes.

Note: As you would expect, routers operate at this layer but they also perform Data-Link and Transport Layer functions. Thus a router is best described as a Layer2/3/4 device.

Note: The functions of the IP and IPX protocols most closely match the OSI Network Layer (Layer 3) and are therefore called Layer 3 protocols.

The Transport Layer performs several functions, including the choice of protocols. This layer provides reliable, transparent transport of data segments from upper layers. The most important Layer 4 functions are error recovery (retransmission) and flow control to prevent unnecessary congestion by attempting to send data at a rate that the network can accommodate, depending on the choice of protocols. Multiplexing of incoming data for different flows to applications on the same host is also performed. Messages are assigned a sequence number at the transmission end. At the receiving end the packets are reassembled, checked for errors, and acknowledged. Reordering of the incoming message when packets arrive out of order is also performed at this layer.

The Session Layer defines how to start, control, and end communication sessions between applications. Communication sessions consist of service requests and responses that occur between applications on different devices. This includes the control and management of multiple bidirectional messages so that the application can be notified if only some of a series of messages are completed. This allows the presentation layer to have a seamless view of an incoming stream of data. The management of sessions also involves the synchronization of dialog control by using checkpoints in the data stream.

The Presentation Layer ensures that data sent from a sending application on the source system is readable by the application layer on the destination system by providing data representation with a variety of coding and conversion functions. This includes defining the conversion of character representation formats, such as ASCII text, EBCDIC text, binary, BCD, and JPEG; data compression schemes; and encryption schemes. Voice coding schemes are specified at this layer.

Examples of presentation layer specifications include:

When a host receives a data transmission from another host on the network, that data is processed at each of the OSI layers to the next higher layer, in order to render the data transmission useful to the end-user. To facilitate this processing, headers and trailers are created by the sending host's software or hardware, that are placed before or after the data given to the next higher layer. Thus, each layer has a header and trailer, typically in each data packet that comprises the data flow. The sequence of processing at each OSI layer, i.e., the processing between adjacent OSUI layers, is as follows:

In addition to processing between adjacent OSI layers, the various layers must also interact with the same layer on another computer to successfully implement its functions. To interact with the same layer on another computer, each layer defines additional data bits in the header and, in some cases, trailer that is created by the sending host's software or hardware. The layer on the receiving host interprets the headers and trailers created by the corresponding layer on the sending host to determine how that layer's processing is being defined, and how to interact within that framework.