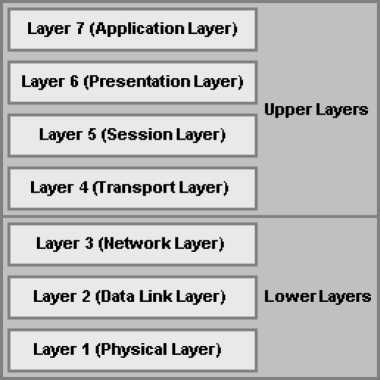 When a host receives a data transmission from another host on the network, that data is processed at each of the OSI layers to the next higher layer, in order to render the data transmission useful to the end-user. To facilitate this processing, headers and trailers are created by the sending host's software or hardware, that are placed before or after the data given to the next higher layer. Thus, each layer has a header and trailer, typically in each data packet that comprises the data flow. The sequence of processing at each OSI layer, i.e., the processing between adjacent OSI layers, is as follows:

In addition to processing between adjacent OSI layers, the various layers must also interact with the same layer on another computer to successfully implement its functions. To interact with the same layer on another computer, each layer defines additional data bits in the header and, in some cases, trailer that is created by the sending host's software or hardware. The layer on the receiving host interprets the headers and trailers created by the corresponding layer on the sending host to determine how that layer's processing is being defined, and how to interact within that framework.