This section covers the following topics:

Next generation wireless LAN (WLAN) security enhancements- What are the new technologies being used to secure 802.11 WLANs?

For developers who have implemented or are currently implementing 802.11 wireless, an alphabet soup of acronyms describe enhanced 802.11 WLAN security. Abbreviations such as 802.1X, EAP, LEAP, PEAP, EAP-TLS, WEP, TKIP, WPA, and AES are common terms in describing 802.11 security. For the network administrator accustomed to dealing with IP and connectivity-oriented technologies, these new security-focused protocols can prove confusing.

potential to offer the same opportunity. 802.11-based devices communicate with one another using radio frequencies (RFs) as the carrier signal for data. The data is broadcast from the sender in the hopes that the receiver is within RF range. The drawback to this mechanism is that any other station within range of the RF also receives the data. Without a security mechanism of some sort, any 802.11 station can process the data sent on a WLAN, as long as that receiver is in RF range. To provide a minimum level of security in a WLAN, you need two components:

A means to decide who or what can use a WLAN- This requirement is satisfied by authentication mechanisms for LAN access control.

A means to provide privacy for the wireless data- The requirement is satisfied by encryption algorithms.

The 802.11 specification provides data privacy with the WEP algorithm. WEP is based on the RC4 symmetric stream cipher. The symmetric nature of RC4 requires that matching WEP keys, either 40 or 104 bits in length, must be statically configured on client devices and access points (APs). WEP was chosen primarily because of its low computational overhead. Although 802.11-enabled PCs are common today, this situation was not the case back in 1997. The majority of WLAN devices were application-specific devices (ASDs). Examples of ASDs include barcode scanners, tablet PCs, and 802.11-based phones. The applications that run on ASDs generally do not require much computational power, so as a result, ASDs have meager CPUs. WEP is a simple-to-implement algorithm that you can write in as few as 30 lines of code, in some cases. The low overhead incurred by WEP made it an ideal encryption algorithm to use on ASDs.

To avoid the ECB mode of encryption, WEP uses a 24-bit IV, which is concatenated to the key before being processed by the RC4 cipher. Figure 4-5 shows a WEP-encrypted frame, including the IV.

The 802.11 specification requires that matching WEP keys be statically configured on both client and infrastructure devices. You can define up to four keys on a device, but you can use only one at a time for encrypting outbound frames. Figure 5-1 shows a Cisco Aironet client configuration screen for WEP configuration. 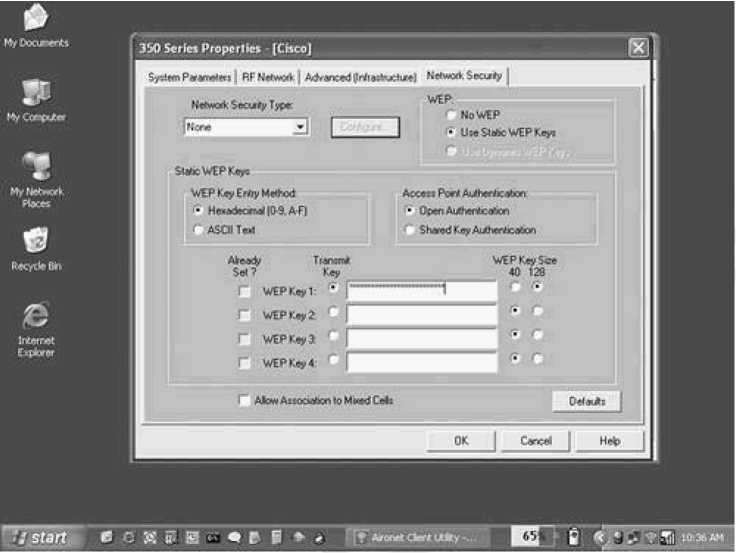 WEP encryption is used only on data frames and during Shared Key authentication. WEP encrypts the following fields of an 802.11 data frame:

The data or payload

All other fields are transmitted without encryption. The IV must be sent unencrypted within the frame so that the receiving station can use it to properly decrypt the payload and ICV.

802.11 is missing some key components to provide effective authentication:

Centralized, user-based management via an authentication, authorization, and accounting (AAA) server, such as a RADIUS, lets you allow or disallow specific users, regardless of the specific devices they use. The requirement for user-based authentication has a positive side effect: user-specific encryption keys. Authentication types that support the creation of dynamic encryption keys fit well into the WLAN security and management model. Per user, dynamic keys relieve the network administrator from having to statically manage keys. Encryption keys are dynamically derived and discarded as the user authenticates and disconnects from the network. Should you need to remove a user from the network, you only need to disable her account to prevent her access.

802.11 specification to allow the client to authenticate the network. As a result, a rogue AP or rogue client station can pose as a valid AP and subvert the data on the client's machine. 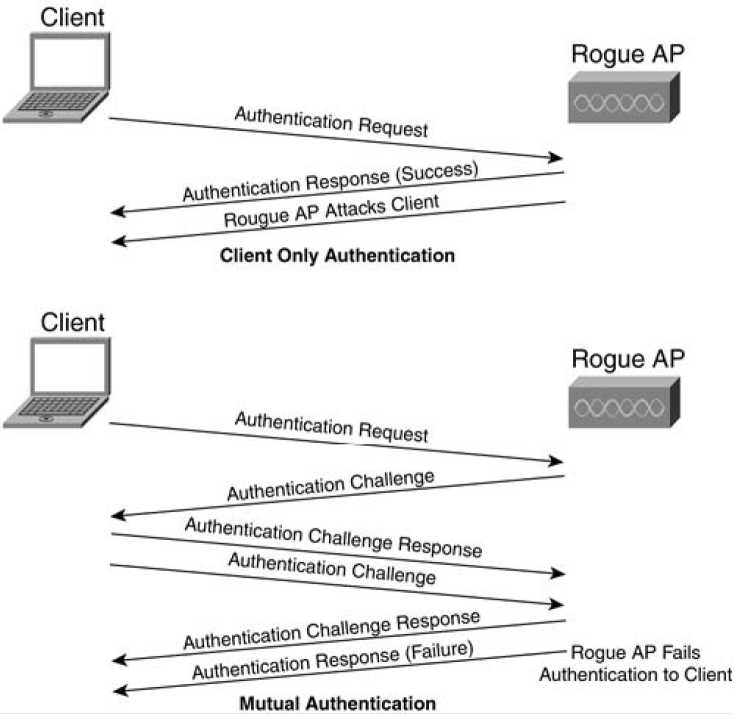 802.11 WLAN vendors and the IEEE understand the need to augment and replace existing security mechanisms, both in authentication and encryption. Work is currently underway in task group I of the

802.11 working group, and after the changes are complete, the security specifications will be ratified as the 802.11i specification.

EAP-Transport Layer Security (EAP-PEAP)- Operates similar to Secure Sockets Layer (SSL) at the link layer. Mutual authentication is accomplished via server-side digital certificates used to create a SSL tunnel for the client to securely authenticate to the network.

The supplicant- Resides on the WLAN client

The authenticator- Resides on the AP

The authentication server- Resides on the RADIUS server

These entities are logical software components on network devices. With respect to 802.11, the authenticator creates a logical port per client device, based on the client's association ID (AID). This logical port has two data paths: uncontrolled and controlled. The uncontrolled data path allows all 802.1X authentication traffic through to the network.